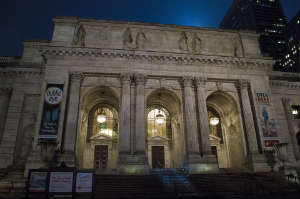 NEW YORK, NY – The Landmarks Commission of New York has approved a $317 million-dollar plan! The most striking aspect of this plan is a new entrance to the New York Public Library. Interestingly, the entrance will be on the building’s West 40th Street wall. The commission is also putting some of the funding towards a dedication. This inscription will be at the new entrance of this library and it is for Stephen A. Schwarzman. The building was renamed for Schwarzman, following a $100 million donation, in 2008.

When the Board of trustees originally made this proposal in mid-February, the Landmarks Commission declined it. The committee made modifications for this plan which led to the approval of the project.

So, what renovations are the committee making?

The building receiving modifications is the 1911 Carrère and Hastings building. Not only will there be an additional entrance to the West 40th Street side, but there will also be a plaza a terrace, a new widened loading dock, and better lighting.

Those performing the renovations will also include Schwarzman’s name at the new entrance. This is due to a longstanding promise that the New York Public Library made to him when he made his donation in 2008. His name is to be included at every entrance into the library due to his generous donation. The plaza is also going to get a dedication. This inscription is towards Library Trustee and previous Board Chair Marshall Rose.

This privately funded project is part of a larger scheme— an initial library revamp project that was agreed on and approved by the library’s Board of Trustees in 2017. The initial project assigned former staff and storage spaces as public space. This increases the library’s public space by 20%.

Construction for the new entrance begins in 2020. The Schwarzman building is to be completed by 2021. The hopes for the project include more reading room, easier access to books and a larger outdoor space. Thus, this will improve circulation and efficiency.