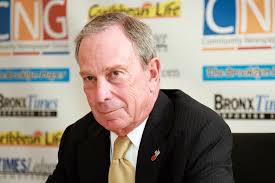 Former New York Mayor Michael Bloomberg, after an aggressive and expensive advertisement campaign, joins Democratic rivals on the debate stage Wednesday. There, he’ll likely face contention from other candidates scrutinizing his past statements and policies.

His bid for the presidency became mired in recent weeks from various comments and mayoral policies in his history. Critics lifted a slew of troubling remarks to the fore. Most recently, comments he made just last year regarding trans rights ignited furor for his offensive take. He referred to trans individuals as “it” and suggested some were “men wearing a dress.”

Though, perhaps the most damage to the Bloomberg campaign comes from his association with racist policing policies during his tenure as New York’s mayor. Stop and frisk, the method of policing that permits law enforcement to stop and search individuals without cause, expanded dramatically after Bloomberg took office in 2002. The practice has since been universally condemned for its disproportionate impact on Black and Latinx communities.

Bloomberg Faces Off Against His Own Record

While the former mayor since apologized, other comments indicate entrenched racial bias. As recently as 2015 he defended his use of stop and frisk. That’s two years after a federal judge ruled the practice unconstitutional. He also suggested the 2008 financial crisis resulted from the end of redlining, a banking policy by which lenders deemed entire neighborhoods of color unworthy of loans without financial examination.

In an apparent attempt to wash the stains of his past off his political image, Bloomberg released a criminal justice reform platform. While it calls for broad reformation, critics state it includes mostly policy already introduced by other candidates.

Still, Michael Bloomberg’s ad budget ensured a broad swath of the American electorate saw a favorable version as portrayed in his commercials. By simply inundating voters, he managed to rise in the polls and qualify for Wednesday’s primary debate. It will be the first real test for the candidate, as he faces off against the likes of Senator Bernie Sanders, Mayor Pete Buttigieg, former Vice President Joe Biden, and Senator Elizabeth Warren to vie for frontrunner status.