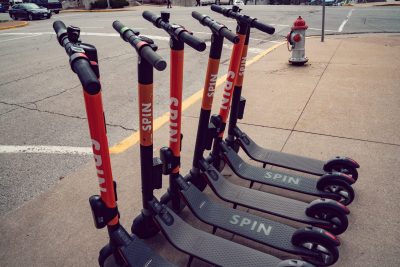 Geofencing has become the new term for many cities who have a scooter program. It involves limiting the scooter’s performance to a set border. This has caused a decrease in missing scooters and many other issues that come from city scooters.

The concept is similar to an electronic collar for pets but without the electrical shock. The goal is to simply stop people from moving outside of the registered border zones. This has been proven to decrease injuries and theft for many scooter companies.

Where are the borders?

The borders have a very extreme difference depending on which brand of scooter you use. Where some companies don’t necessarily have a border, they will simply drop the speed limit to the designated area that you are moving into. Sometimes you might find yourself slowing down drastically from 15 mph to 5mph because you crossed into a different territory.

What Will Happen When You Cross a Border

If you leave the border, a scooter might simply slow down to the registered speed limit of that area, while others may just stop altogether. Now, this doesn’t mean that the brakes will instantly lock up while you’re bombing down an LA hill, but it means you will feel it slow down to a complete stop. If this happens, you have the unfortunate responsibility of walking the scooter back up the hill until it is back within its designated borders.

As if the city of LA would ever let people just take these scooters all “willy-nilly”. There are GPS tracking devices installed into every scooter. If the GPS senses that the scooter is being taken out of its jurisdiction, then it will stop. If it is stolen and put into a car, then the GPS will help locate the device.

Polestar Has To Recall Their Latest Electric Vehicle Because Of Inverters