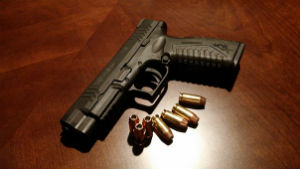 Police have arrested a 64-year-old New York state man who shot and killed a pair of burglars who were going through his stuff on Tuesday. According to police, the man used an illegally owned in the shooting.

At around 2:40 p.m., police officials indicate that Stolarczyk walked in on a man and woman robbing his home located in Deerfield, New York. This area is about four hours north of New York City.

After the surprise encounter, the 64-year-old shot the intruders, killing both. Later, police arrested Stolarczyk after authorities decided he used an illegally possessed firearm in the shooting.

At the crime scene, police identified the woman as 57-year-old Patricia Anne Talerico. They pronounced her dead immediately. An ambulance transported the other burglar, 27-year-old Nicolas Talerico, to the hospital where he eventually died as a result of the gunshots.

Police charged Stolarczyk with criminal possession of a firearm and he was transported to the Oneida County Jail. He’s there now awaiting arraignment.

Police say the investigation is open and ongoing.