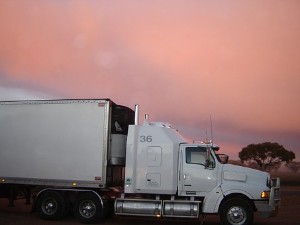 It’s been an ongoing problem but with each passing year it just seems to get worse. The impact of freight trucks on Bushwick, Brooklyn is often described as devastating. However, as the geographical and industrial center of New York City, this is where freight has to arrive on a consistent basis. And if one looks around on any given day, you can see trucks double-parked everywhere throughout the city where they load and unload various goods.

Bushwick is one of several community boards across the city that have decried the truck traffic within its statement of district needs for this fiscal year. Their umbrella gripe on the matter is that these trucks create noise, pollution, congestion, and destroy the streets. These boards are asking for the city to perform studies on the trouble-spots and also want more police out on the streets to enforce truck route regulations.

These trucks also serve as an enormous hazard on New York streets. In fact, nine cyclists have died just this year in wrecks with trucks. This data comes courtesy of city officials. Plus, in 2018, according to the Department of Motor Vehicles, there were around 8,000 crashes throughout the five boroughs that involved trucks.

“Trailers and trucks that make deliveries use tertiary roads around our district and it absolutely destroys the roads and backs up regular vehicle traffic that we’ve been trying to alleviate,” says Nicholas Siclari, chairman of Staten Island’s Community Board.

Naturally, the big question surrounds how to reduce the damaging effects of truck traffic. But it’s no easy chore. After all, the exchange of goods is vital to the city’s economy. But the problem has been further complicated by the increased use of home-delivery services like Amazon, Prime, and Fresh Direct. The city has taken measures like demanding that more businesses make and accept deliveries at night. They are also seeking new ways to transport cargo. For example, just last year there was a plan put in place to transport more goods by rail and city waterways.

So the plans in place now to address this problem are Freight NYC and Off Hours Deliveries Program.  The former is an initiative intended to spark more transporting of goods through rail and boat. The latter suggestion is to incentivize companies in a volunteer program where they make deliveries at non-traditional hours. Unfortunately, trucks are still going to dominate. Especially since even if goods are moved by boats or rail, the way New York City is constructed demands that these goods then get put in trucks for the last stretch of their journey.

What do you all think? Is there any solution to the truck problem in New York?